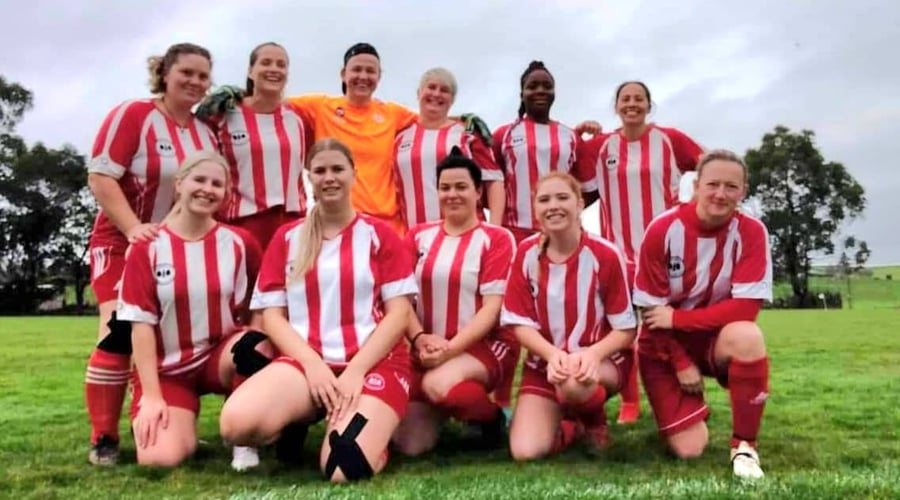 Check out our match results from the previous weekend!

Despite heavy rain in the lead up, Melville's no 1 pitch was in good condition with the exception of a few puddles @ the car park end.

Melville started better scoring from a long range attempt 3 minutes in, dropping just under our crossbar, they doubled their lead @ the 11th minute from a breakaway (against the run of play).As the game progressed our ladies started to gain the advantage with some lovely one touch passing up the field only to be pushed back by long boot clearances from Melville making us  have to restart back in our half. Chantal Fur was unlucky not to score hitting the inside of the post with the rebound falling back in the keepers hands.

Second spell we continued to press and were rewarded with a penalty 7 mins in, calmly put away by Lydia. Lapse in concentration saw Melville regain their two goal lead on the hour but a quick reply from Rachel minutes later put the score 3 2 with 30 minutes to go.We had the better of the 2nd half dominating possession but couldn't beat the Melville keeper. Chantal again coming closest, hitting the crossbar.

A very physical encounter against a well drilled defensive team.

Traveling away we left with a skeleton crew of 11, sick, injured and old.

We started off with Leydi scoring within the 1st minute. However we were not used to a small pitch and were playing a messy ping pong game. Hilary with jet lag found her boots and scored. Welcome back captain! Leydi scored 1 more before half time.

Not our best performance but under the circumstances not too bad, Mangakino is always an amazing team to play thier fun spirit always gives us a great laugh on and off the feild. 2nd half an injury put Danni in goal as we had no subs, which meant player of the day Elliot had a much needed run on feild and we think Elliot could have run all day!

Jade finally scored after many, many attempts, as we started to pass and receive better we found more balls found thier way to the net. Hillary put a great through ball through for Georgia to score and Leydi added an additional 4 goals including a funky little back heel into the net. All in all, a great day trip away against a fun social Mangakino team. Thanks to the ladies stepping up and running a full game.

Thankyou Ebbett Toyota for the community van, its a great way to bond and unwind together.

This week’s game was at the picturesque Hibiscus Coast who are currently the hot favourites to top the league come the end of the season.

Hindered by the loss of the Clarkin brothers for this fixture Cambridge were forced to play a number of players out of position. However, they more than matched their opponents in a very even and entertaining first half of football. Cambridge suffered a major blow after 20 minutes when skipper Patrick Woodlock succumbed to what looked like a hamstring injury. Nate Claridge replaced Woodlock to continue the midfield battle.

The industrious Cambridge were extremely well organized and frustrated their opponents into increasing periods of uncertainty. So, it was somewhat of a surprise when Hibiscus took the lead, on the stroke of half time when Josh Nooijens unluckily put into his own net in attempt to cut out a low and dangerous cross.

The beginning of the second half saw Cambridge playing some enterprising football in an attempt to level the score. Unfortunately, it wasn’t to be, and Hibiscus increased their lead when their striker, Adam Dickenson, clinically finished a well worked move. In fact, Dickenson proved to be the difference between the two sides in what was a top-class individual performance. It was Dickenson who converted a penalty kick later in the game to make the score 3- 0. A tiring Cambridge conceded a 4th as the game drew to a close.

Although a 4-0 loss, this was not a 4-0 game. Cambridge can be proud of their efforts as they matched Hibiscus for much of the game, keeping possession and playing some good football. Their spirit and industry could not be faulted.

It was good to see new signing Sham Chetty make a very encouraging 1st team debut coming on as a second half substitute.

Man of the match was Josh Nooijens who had an excellent game. Blair Pennell, Nate Claridge and keeper Nate Camplin were also outstanding, Camplin pulling off a number of excellent saves - the young Camplin is improving with every game and has a bright future ahead of him.

Hibiscus Coast U23 vs Cambridge Football Club Under 23's

Hard work and grit would be two words that summed up Cambridge U23 Development squad during Saturday’s visit to Hibiscus Coast.

After two defeats the young Cambridge team knew another defeat wouldn’t have been acceptable.

Cambridge started off slow against a very direct team and found themselves camped in their own with strikers Johnny Grimes and youngster Rahim Nabizada with little to work with going forward. Hibiscus managed to take the lead before half time and the Cambridge knew changes need to be made. Tom Gifford was thrown into centre and a tactical switch saw new signing Sham Chetty pushed into the a unfamiliar centre mid to add a bit of spark into the midfield. Straight after the restart Cambridge managed to slowly open the home team defence and wingers Willem Dikmans and Andrew Ganas who was also making his northern league debut started to find space in behind the defence but just couldn’t find that final pass to grab a equaliser.

A long ball from Callum Roberson found it’s way through to Nabizada who found himself one on one with the on rushing goal keeper and the youngster kept his composure to slot the ball into the bottom right and hand corner 1-1 and Cambridge were in total control.

The back 4 of Reidy, DIxon, Gifford and Landar stood firm to anything that was thrown their way from the home team.

Next game home vs Claudelands Rovers

As the old saying goes, “all good things come to an end.” This was the case for The Cambridge Championship side’s long unbeaten run this season. The windy conditions would have made Otumoetai feel at home and the game was fought out over 90 minutes with spells of great football and physicality from both sides. It was the away side who took an early advantage on the 8th minute as an Otumoetai player glided through The Reds defence and laid a ball across the box to be slotted in the net. Cambridge then fired up and levelled following a neat passage of play with Silvester whipping a ball in to the unmarked Brady who expertly tucked away his 6th of the season.

The second half had all the makings of a Cambridge winner until a soft handball call from the referee awarded Otumoetai a free kick in a dangerous position which was taken quickly, fed in to the box and scrambled home to give the away side the lead. Cambridge stepped up their search to keep their unbeaten run going and were unfortunate for the second week running not to be awarded a penalty late on after a blatant handball in the in the box which the referee later admitted was the wrong call left the reds feeling aggrieved and ended the game with a 2-1 defeat.

There’s four more games to go this season and the title hunt is not out of arms reach and only sit 3 points behind the leaders.

Next game: (A) vs Claudelands Rovers