A key focus of our club is to build community links, and we have done this in a number of ways.

We estimate every tenth home in Cambridge has a family member connected with our club so we try our best to be good residents and neighbours.

As well as volunteering more than 30,000 hours a year of unpaid labour to our club, our members and supporters have also helped other community events, ranging from acting as stewards at events for other sports to hosting local school sports days.

Our efforts were recognised when we became only the second sports club to win the Supreme Award at the Waipa Trustpower Community Awards.

Here’s an eight-minute presentation from Waipa Mayor Jim Mylchreest and club representatives at the national finals of the Trustpower Community Awards in Wellington, March 2015: 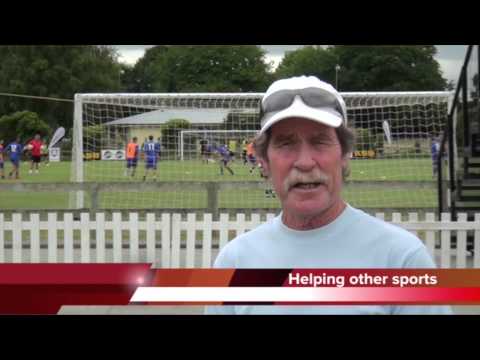 Since 2013, our club has been a partner with Corrections New Zealand, providing work opportunities for those required by the courts to perform community work. Our work was recognised in 2016 when the club received a Corrections NZ Waikato Partnership Award.

As well as trying to succeed as a local football club, we aim to be good members of ‘football’s family’, actively supporting efforts by our regional federation (WaiBOP) and our national body (New Zealand Football).

We have hosted WaiBOP events such as Waikato Cup and Plate finals, national league fixtures for men and women and we also staged our first international match when Fiji and Hungary played an U-20 friendly match in Cambridge in 2015.

To encourage youngsters to take up sport, we’ve been involved in promotions such as giving away more than 100 footballs to local schoolchildren.

In recent years, we have helped support struggling football teams in Uganda, Cambodia and Malaysia by sending them kit and balls that have reached their use-by date for our purposes but can still be used.

We also offer a warm welcome to visitors from all around the world!

Why community is important

The club has adopted a Strategic Plan to help guide decision-making for the period 2016-2022. Building strong community links is one of four pillars of our plan.

You can read it here