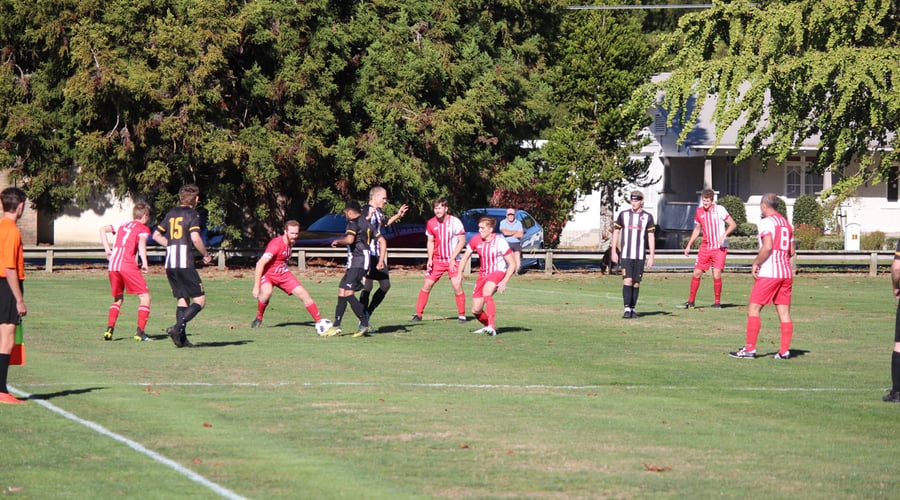 The div 1 women vs Unicol at John Kerkhof Park in a very even and thrilling game. The game started in a very even half where the ball was in both halves and continued that way until the second half where Unicol caught a break and scored against Cambridge making the score 1-0 to Unicol. Cambridge continued to fight and managed to get a free kick just outside the box. Gen Churton set up for her free kick and took a beautiful shot on goal where she put the goal in the back of the net making the score 1-1. Both teams continued to face off until full time where the game ended in a draw. It was a great game to watch and it was a great day of football.

MOTM: Eli Wichmann was our player of the day because of her outstanding performance in the defence line.

NEXT GAME: 8th May away against Ngaruawahia

A brilliant day in the Sun with Mangakino arriving with only 10 players we agreed to match them with 10 of our own, Wiki started with a cracker goal scored in the 1st minute, Leydi scored an impressive 5 goals in the first half, super sub April came on to score in the 24th minute.

Finishing the game with another 5 goals from Romi (2) Mariela (1) and another 2 to Leydi.

Mangakino played a brave game and with a newbe to the goal we applauded her effort.

NEXT GAME: Away to Thames next week.

On Saturday we welcomed west Auckland to John Kerkhof park for match day number 3. The game began with Cambridge in control pressing high up the pitch and putting west Auckland under pressure what is safe to say our best start to a game this season came to an end when we failed to clear the ball from a corner to go 1-0 down with a chance just before half time to equalise Cambridge missed an open goal. Going into the break 1-0 down Cambridge came out in the second half with a point to prove failing to put chances away a coaches decision to go 3 at the back to try push for an equaliser resulted in being caught on the break twice one being a blatant off side coach the next being caught by the run of play. Full time finishing 0-3 to west Auckland. The team look to re group and have two big training sessions this week before heading to northland in search of getting points on the board.

NEXT GAME: 7th may away to northland.

Another sunny Saturday saw Cambridge U23’s record their first 3 points of the season as a first half onslaught saw the young team beat travelling side West Auckland 7-0.

Cambridge dominated from the first whistle and found themselves 3-0 up within 15 minutes with goals going to Kyran Lockwood, Colin Coster and Johnny Grimes.

A sweetly struck free kick from Kyran and a goal direct from a corner for Coster saw them both get a brace in the first half and Cambridge going in at half time 5-0 to the good.

Cambridge stayed in control for the second half and added two more with Colin Coster netting from a free kick to bring up his hat-trick and sub Ben Dixon smashed in number 7.

Next weekend: we travel up north to take on Northland FC

The Cambridge Championship side are making a habit of dominating games but found themselves yet again in a familiar place against league leaders Taupo. The Reds put together a string of relentless attacks and had the ball in the net twice from forward duo Adam Brady & Dylan Blair, only to be wrongfully disallowed for offside each time. Tom Woutersen let fly a 25 yard belter which cannoned of the outside of the post and with further chances being squandered for the home side, Taupo found themselves ahead against the the run of play and took a 1-0 lead in to the break after a goal mouth scramble. The second half was more evenly contested with both sides having their fair share of chances. The persistence from the reds eventually paid off when Dylan Blair curled one in to even up the score board. Sadly this was to be it as Cambridge were held to a 1-1 draw for the 3rd week running but keep their unbeaten start in tact. Player of the day went to goalkeeper Rex Fowler for his outstanding and commanding performance to keep out some of Taupo’s vital chances.

The D1s played our ever first competition night game away to Te Awamutu on Friday night.  The TA players who are new to the league appeared to be born in 1980s whereas most of us were born in 60s and 70s. TA played the night football conditions better than Cambridge and led 5 nil at halftime. With words of wisdom at half time from coaches Feaver and Bomans the D1s found themselves 7nil down after 47 minutes.  But in true D1 style we got our act together,  played football, never gave up, scored, hit the post 3x, missed a penalty and walked off the pitch having played an enjoyable game of football.

Special mention to the two James, Tabor and Pocock who defended really well.  Good on TA for putting on Friday night football and good have a crowd of around 50 watching.

Next week: home to Melville.

Cambridge made their season debut with a hard trip to a seasoned Melville team on a pitch best described as dirt and gravel. After a period of feeling each other out, Cambridge begun to stamp their mark in terms of style and tempo with numerous chances going to waste and fine keeping from an inspired Melville goalie. More of the same followed in the 2nd half with Cambridge breaking the deadlock when a cross come shot from Deivis Castillo was parried out and dispensed of by Grant McIlmurray. A solid back 4 kept limited Melville counters at bay with Keeper Paul Macann not having a single save to make.

MOTM: Darren Johnson on his Debut for Cambridge.

Next week: We welcome Cambridge Statesmen to the first Derby of the season