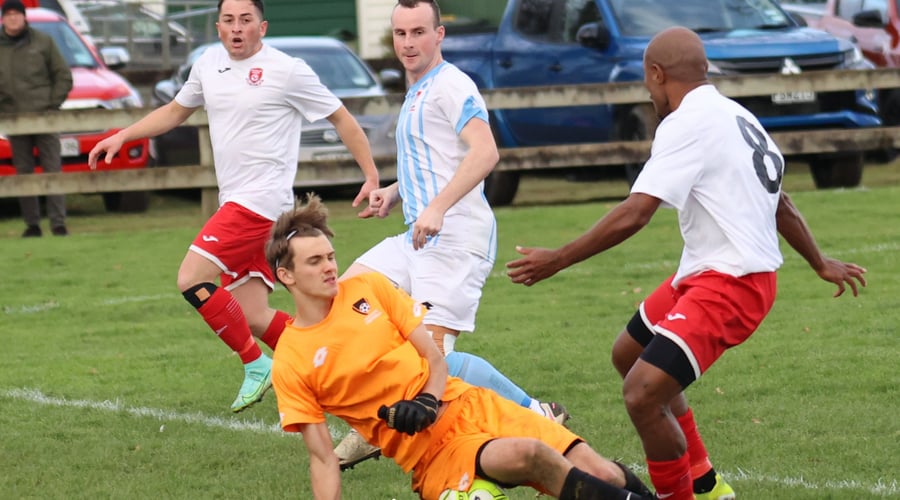 Check out our match results from the weekend!

This was a disappointing defeat for Cambridge 1sts in what was a fiercely fought but scrappy game. The game was littered with many disputed and questionable refereeing decisions which only served to add to the frustration of both sets of supporters and players.

In the opening minutes Cambridge keeper, Nate Camplin luckily avoided serious injury after being kicked in the head after a clumsy challenge from the Buckland’s striker. The incident went unpunished and unfortunately set the benchmark for the rest of the game.  Having said this, Backlands dominated the first half with Cambridge seeming to lack any intensity and allowing their opponents too much time and space when in possession.  The home team had a number of near misses before scoring two goals in the space of just 4 minutes midway through the half.  At 2-0 things looked comfortable for Bucklands as they went into the half time break two goals to the good.

The second half began with increased intensity from Cambridge who seemed to have awoken from their first half slumber. However, in their search to reduce the deficit it was always likely that Cambridge would be caught on the break and that is exactly what happened when, in the 75th minute, Buckland’s increased their lead to 3 0. With time running out and little hope of turning the game around Cambridge emptied their bench to blood some of their youngsters and give them Northern League experience. So, congratulations to Matt Kozak, Josh Dixon and Blake Taylor on their debuts.

Man of the match was, yet again the mercurial, jasom Khatkar, who was a constant threat throughout the game.  Nate Camplin also put in a very brave performance between the posts. Patrick Woodlock and Dan Clarkin also featured prominently with first class performances.

For Cambridge, this was a wakeup call, but there are still plenty of games left to play and there is still good chance of competing for the top spots in the league.

Bucklands Beach Under 23's vs Cambridge Football Club Under 23's.

A win would see the young Cambridge side jump above their opposition into 3rd place.

After a couple of late pull outs due sickness saw the management team swap but was still confident on claiming all 3 points. Bucklands took it to Cambridge from the get-go. Cambridge struggled to find their rhythm and found it hard to break through the home teams back four. A dubious offside call saw Bucklands take a deserved lead followed by a defensive error to see them hit Cambridge for 2 in quick succession. The back 4 of Sam, Jack, Matt and Cris put their bodies on the line to stop the score from getting out of hand. Bucklands managed to get another one just before half time as Cambridge started to find their groove. A rallying call at half time saw the introduction to youngster Rahim Nabizada who had recently been promoted from the u16s Cambridge squad after some encouraging displays. Rahim came close to grabbing a debut goal but was closed by the on-rushing goalkeeper. Johnny Grimes and Ben Dixon had chances of their own but was unsuccessful in converting these chances. Cambridge threw everything forward including coach Joe Gifford but after Buckland’s found a 4th the game was all but gone.

Cambridge pushed for a consolation goal but again just like Franklin couldn’t find the back of the net.

MOTM: went to youngster Nabizada who made an instant impact of the bench and was unlucky not to get on the score sheet.

This week we travel to Hibiscus coast as we start round 2.

Cambridge went to Thames with 12 players available and ended up with 11 players for 70 minutes with Yash Niewiadomski picking up an injury in first half. Cambridge battled hard but couldn't find away past Thames goalkeeper who performed 2-3 outstanding saves. Thames won the game 2-0 and handed Cambridge Div 3 their first loss of the season. The boys left everything on the field and can be proud with the teams efforts against a good Thames side!

MOTM: Matt Vink for his overall play in the middle of midfield.

Next game is a Bye round

The Unbeaten Cambridge Seriously Over 35’s came up against third placed Claudlands. The game started with Cambridge pilling on the pressure which was rewarded when Miguel Peterle heading in from a Kieran Hill corner. The score was soon 0-2 when Paul Blackstock’s late back post run led to a well placed tap in. Blackstock made it 0-3 soon after with a carbon copy of his first goal but, in typical over 35’s fashion, he injured himself whilst scoring and was unable to compete his hat trick.

Soon after halftime, leading scorer Hill scored for the third match in a row when he rounded the keeper and slotted home. The scoring was complete when the lighting quick Brett Clark powerfully headed home a Deivis Castillo cross for his first goal in about 25 years. Peterle then completed a unique double of keeping a clean sheet and scoring a goal in the same game, something regular keeper Paul Macann achieved a few weeks ago. Thanks to Statesman’s keeper Anthony for stepping in for the first half.