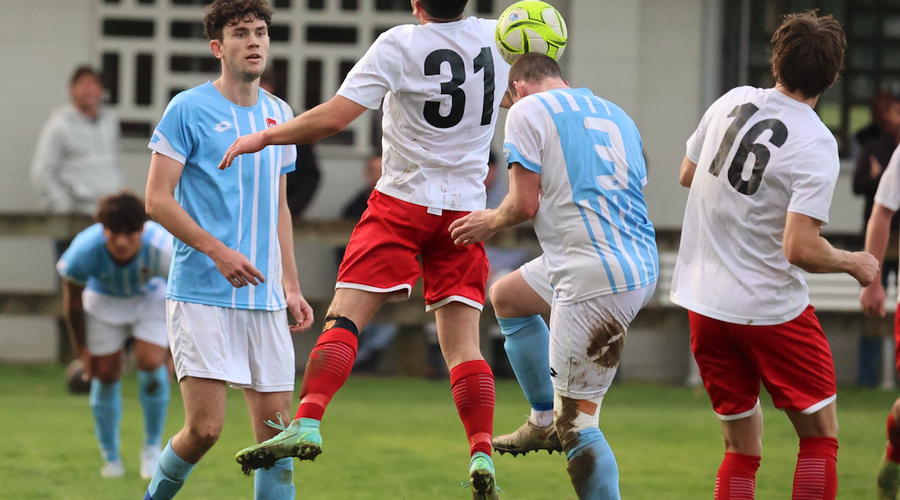 CFC started well with an excellent strike from Zoe Fon, 25m  out hitting the roof of the net 3 minutes in,  however unicol replied 5 minutes later with a long range lob dropping just under the bar.  CFC continued to press in the 1st half and were rewarded with another goal @ 20 minute mark with April Haines pouncing on a fumble from the unicol keeper. Unicol equalised again just before half time, so 2 2 into the break.

Unicol stepped up in the 2nd spell and were rewarded with a goal 4 minutes in, a very tight and competitive second half ensued with both sides having opportunities in front of goal. On the hour Unicol got the break they were looking & scored their 4th and finishing with a 5th just before full time.

Next game we face Ngaruawahia @ home.

Starting out dressed in black with fog covering the pitch end to end, we thought we were in for an easier game, we were quickly assured it would not be by the strong Northern attack. Once we settled Selina punted a ball from centre back, thinking this was an easy pick up from the goalie we were delighted to see a fumble and a bounce over and in... however they answerd our cheers with a goal slotted into the back of the net

bringing us to 1 all. Leydi came back to the centre to remove the ball from their possession, she turned and took it all the way to the front to score an impressive one on one with the keeper.

Mareilla who after a month away, returned in full swing to add another goal to her list.

Northern took a corner that had us scrambling in the box with them coming up trumps picking the ball out of the net.

With Andys half time talk we came back to the pitch determined to pick up our pace and keep the score card in our favor.

The defence and goal keeper Elliot did just that with a clean second half. Emma C returning to the pitch from injury scoring a lovely goal taking us to a healthy 4-2 win.

POTD: Wiki who gave a memorable captians speach at the start of  the game and carried her positive attitude and encouragement onto the feild. Fairlie also received player of the day for the grit and determination (and many throw ins) she gave the back line.

NEXT GAME: Vs Melville away 11am

Today’s game was between two evenly matched teams both vying for a place in the top half of the league and a realistic shot at promotion to NL division 1.

Cambridge began well and looked dangerous with Josh Clarkin, Anton Ganas and Glen Carmichael consistently causing Franklin major problems down the right flank. Inevitably, it wasn’t too long before the home fans were rewarded with a 20th minute goal neatly tucked away by leading scorer Clarkin. Franklin responded with a series of attacks leading to numerous goal scoring opportunities. However, young Cambridge keeper Nate Camplin pulled off several fine saves to keep the score at 1-0 going into the half time break.

Unfortunately, the second half remained a scrappy and dour struggle for dominance with neither side able to gain the upper hand. Franklin eventually equalized in the 52nd minute though Grey and with the score at 1-1 Cambridge were forced to pull on all their resilience and determination to regain the lead on the hour through a well taken Josh Clarkin goal. With Cambridge leading 2-1 and the brilliant Camplin making a series of great saves the game limped to the final whistle with Cambridge claiming all three very valuable points. This was not a football match that will linger long in the memory, but Cambridge did what was required to earn the win.

Camplin was superb in goal and Jasom Khatkar was yet again a standout performer. Mr. consistency, Blair Pennell, was excellent in defence and Anton Ganas produced a fine all-round performance in the Cambridge midfield.

A few injuries have snuck up in a recent couple of weeks which saw a bit of a swap around in positions for the reserve side.

Unfortunately even with a dominant first half both teams were to go into the sheds at half time 0-0.

A suspected high foot was missed by the referee which allowed Franklin to take the lead against the run of play after the first attempt struck the bar before landing at the centre forwards feet who’s shot deflected passed debutant goal keeper Callum Roberson. Cambridge threw everything forward in the closing minutes but could not find a way passed the travelling goal keeper.

MOTM:  Kyle Stead who has been a brick wall for the defence this season.

The invincibles returned to John Kerkhof Park for a derby fixture against Matamata determined to avenge the reverse fixture which saw 3 points slip out of their hands in the dying embers of the game.

The reds got off to a bullish start and the physical battles were being won in a new look 3-4-3 formation. Solid build up play across the pitch mean Cambridge were dominating much of the half. Cambridge struck on the 10th minute in the shape of Aaron Huesser with a well taken goal. Shortly after, fellow striker Adam Brady capitalised on a defensive error and placed his shot in to the bottom corner. The aptly named Flying Dutchman (Tom Woutersen) was causing havoc in between the midfield and attack but unfortunately sustained a groin injury bringing The Reds temporarily down to 10 men for the final minutes of the half. This loss was noticeable as Matamata started to gain more control of possession and began creating chances of their own.

In the second half, Matamata came out with their tales up and some silky skills from Swifts winger Davis had Wade Ellis weak at the ankles and found a way past Fowler to bring one back for the away side. Cambridge reverted back to their familiar 3-5-2 with Mason Woodall being introduced in to the midfield. This tactical masterclass enabled Cambridge to steady the game and were able to then push on to look for another goal. Winger Jordan Silvester continued to show his class throughout the game and was rewarded with an excellent strike in to the top corner on the 81st minute bringing relief to the team and home supporters. This dampened the spirits of Matamata and by taking their foot off the gas allowed Cambridge to find one more in the 90th minute with Aaron Huesser grabbing his second and 5th of the season.

POTD: Jordan Silvester for his tireless performance and goal.

A long weekend plus covid/ flu enforced absenteeism meant the seriously over 35s were scratching around for players on Saturday morning with 7 unavailable.

We managed to get 13 together to play a northern utd seniles team. The game started off as expected with the seniles proving hard to break down in the first 20 with Cambridge spurning numerous chances in front of goal which the strikers put down to the Cambridge bobble. It took the inspiring substitution of Wayne, in his first game for the team, to ease the tension when he scored with his first touch of the ball to beat a couple of players on the edge of the box and put it away. A couple minutes later he made it 2 and not wanting to be left out Robbie chipped in with a trademark dribble into the box and round the keeper to go into half time 3-0 up.

The 2nd started slowly and we got a wake up when we conceded our 2nd goal this season with a strike from outside the box which you could only watch and applaud, which happened to be their only shot all game.

After that we found our rhythm for Deivis to put 2 away, Miguel or was it Alex to get one (they can dispute who it was, think it touched a hair on Alex’s leg) Marcelo with 1 and finally for Wayne to finish off his hat trick before needing a rest (we might not see him for another few weeks while he recovers).

Overall a satisfying result which keeps the team ticking along near the top of the table.

A game of two halves is how Saturday’s encounter against Aucklanders Franklin United will be summed up.

High flying Cambridge Div 3 took on 2nd place Northern United Debacles in a close battle at KoriKori Park. Cambridge started of with a chance early in first half from Peter Buesnel putting his effort wide. The game itself was like tennis match going back and forth. Cambridge backline hold their ground and defended well throughout. Only one other clear chance where Cambridge Captain Tom Slabhead Gifford had a looping shot which made Debacles keeper perform a quality save. Going into secondhalf Cambridge coach Cole Van Den Beuken wanted his boys to control the game through the middle. Both teams was struggling to break down the defence until, Buesnel found some space on the wing and picked out Gifford on 18 yard box where he hit it on the half volley and went top bins. Debacles was through everything at Cambridge defence but they were like a brickwall and nothing was getting past them. The game finished 1-0 to Cambridge which keeps them top of table and unbeaten

MOTM: Kai Funnell with his hard working in the middle of midfield

Next game against Thames away another big game for Mr Van Den Beuken men.