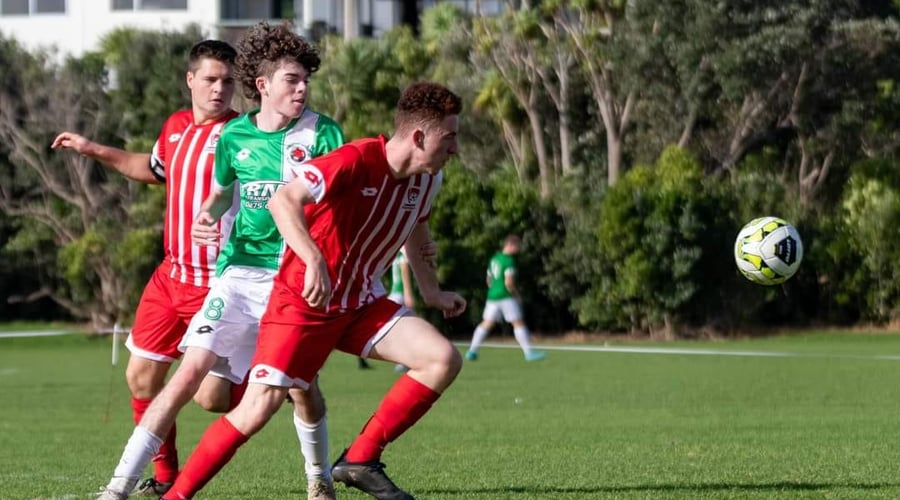 Check out our match results from the weekend!

With the biggest travel distance upon us, we were worried the journey would tire us out. Some groovy tunes in the changing rooms amped us all up and that carried over into an awesome first half.

The travel woes were for naught with Rach opening the sheet at the 10-minute mark. This was followed by a brilliant free kick from Gen in the 22nd minute. This was Gen’s first touch in the game, and we saw the ball be placed perfectly to bounce under the keeper legs.

Nig has dubbed the first half the best performance we have had so far. Good stuff everybody!

The second half saw Taupō rarked up following what can only be assumed as a rough half time grilling from their coach. Cambridge not being a club to park the bus there, continued to attack. Zoë found the back of the net at 57 minutes, taking Cambridge to a 3-0 lead.

This lit Taupō on fire and saw them manage to score a breakaway goal. Our defence did great to block Taupō further, especially with some potential threats from strong corners in the last 15 minutes. Aimee pulled off a couple of game saving blocks too – thanks mate.

Brilliant effort from all today saw us beat Taupō who are top of our table and have only lost one other game in the past 2 years.

Papi of the day (POD): Sarah McKnight – great, consistent, and calm work as right back. Lovely plays starting from Sarah as well as some wonderful tackles, halting Taupō from getting in our half many a time.

NEXT GAME: Away v Northern.

A cold winter's day for our away game to Jansen Park, we encountered a slightly different team to our previous Unicol game, probably our most physical opponents yet. Unicol gave us a very strong attack, but our back line held it together nicely, Georgia and Hilary gave great direction in the centre back, winged by Gabby who whilst having a strong defence also pushed in attack backing Lorena up nicely!

On the other side of the pitch defence "player of the day" Paris combined with Caitlyn on a cracker 1-2 cross play to Lorena to see our first ball hit the back of the net.

Our midfield battled it out for the full 90 mins never giving up and should be proud of their efforts.

Olivia showed some fancy footwork to their defence who had quite a job keeping her and Leidy at bay, distracting them enough to allow Leianne to net another goal, to seal the 2 nil win.

Well done to our team who kept their heads in the game and Eliott who again managed a clean sheet!

The under 23’s lads traveled away in a much anticipated fixture against West Auckland looking to continue a stellar season thus far which has been proven on and off the field. The boys started the game in quick fashion with veteran Player Coach for the day Joe Gifford sitting deep in midfield to offer the youngsters some security in defence and a license to express themselves with some mouthwatering talent on display.

The first half was all one way traffic with Matt Kozak Marshalling his troops and the English Zidane lookalike (Joe) and Jonny Grimes providing a solid spine, this gave license for the first teams outstanding performer last week Noah Skipps to get at the West Auckland defence and create consistent pressure. The young but experienced threat of Noah, Will Jackson and Kyran kept West Auckland under the pump as it only seemed as if time would only tell when the gates would open. Although the constant onslaught and some beautiful football played across the park the boys found themselves at 0-0 at half time.

The boys high in spirits as always, took the field in the second half to a much similar look and feel, lots of possession and attacking threat but the final pass wasn’t happening. With 30 mins to go West Auckland caught Cambridge on the break scoring a deflected goal. This spurred a spirited response from the young lads and a change was made with a long anticipated comeback from injury in Colin Coster. The change paid off instantly with Colin providing a beautiful assist for Kyran who scored with 20 mins to go, locking the scores at 1-1.

With the pressure mounting and mounting, West Auckland defence caved in the final minutes of the game from yet another beautiful assist from Colin Coster as Blake Taylor fired the ball home from just inside the box taking the game 2-1 and all 3 points with 2 minutes to spare.

A notable mention goes out to young Theo for making his Debut from the under 16. A big thank you Will Jackson for his contributions to both the first team and under 23’s this year. Will departs the club to head back home to the UK after an amazing season in 2022 being a shining light for young talent at Cambridge FC.

Player of the day was Willem Dikmans for a consistent shift throughout the entire 90 minutes & there were also stand out performances by the following lads: Noah Skipps, Will Jackson, Kyran Lockwood, Matt Kozak, Blake Taylor & Colin Coster.

NEXT GAME: Home vs Northland

On a day where you could have picked 13 players of the day, Cambridge knew they had arguably the toughest game of the season against a strong Tauranga City side.  Determined to start well, Cambridge dominated the early spells and went 1-0 up on 10 minutes from midfielder Ryan Ashby. The reds then shortly after found the net again through Adam Brady only to be ruled out for offside. The first half was an excellent advert for Championship football between two of the best footballing sides in the league. City were limited to long range efforts, struggling to find a way through and the score remained 1-0 at the break.

Cambridge had to replicate the first 45 but Tauranga couldn’t have started the half better after Arthurs slithered through the Cambridge defence for the equaliser on the 46th minute. This however, was a short lived celebration - Wade Ellis’ quick throw in to the pacey Silvester who blitzed down the line cut a ball back across the box where striker Adam Brady’s well timed run was there to smash the ball home to give Cambridge the advantage once again.

It was a well contested game with excellent support on the sidelines which helped give Cambridge the boost needed to snatch a vital three points. There’s 2 games remaining and 4 teams still have a chance of winning the title.

Cambridge struggled off the mark early letting Northern take control of the game and going down 1-0 after 15min. Cambridge had a few opportunities to equlize in the first half bit could not find the back of the net.

After the break some good play down the left flank lead to the ball falling at Skipper Tom Giffords foot and he managed to chip the keeper and bring the game back to 1-1.

It was a good fight to the End of the match with both teams having chances but Northern were the only team able to convert handing Cambridge their Second loss of the season.

NEXT GAME: Home against Claudelands, Cambridge look to bounce back this week as they look maintain their position at the top of the Div 3 Table