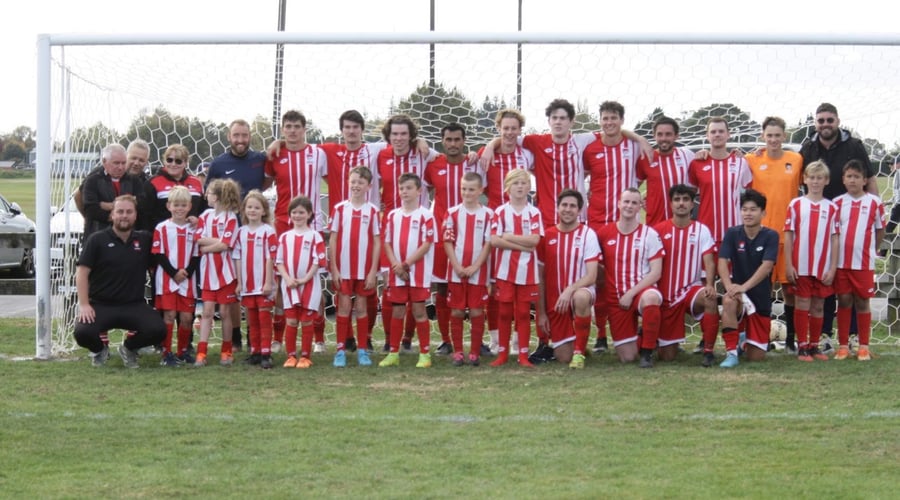 What a weekend it's been! Have a read below of our results!

Cambridge was in the Mighty Auckland Region this Sunday vs Beachlands Maraetai. The game started off slow with our girls fighting against the wind needing to play very defensive and this gave the Beachlands the opportunity to score two goals from two corners in the first half. Our girls came back fighting in the second half and took the majority of the possession being in our half of the field. Unfortunately our girls one epic shot hit the cross bar and the game ended with Beachlands winning 2-0. Our girls never gave up and kept fighting for the ball and for their team.

POTD: Loryn Orr for her outstanding work in the backline and for her determination to fight for the ball throughout the game!

Next game: Matamata away!

We welcomed Onehunga Mangere to John Kerkhof park for the start of our Chatham Cup Run. We knew it was going to be a challenging round for the boys and required a lot of mental & physical strength. The Reds came out of the sheds with their eyes on the prize & determination to progress into the next round of the Chatham Cup. Josh Clarkin helped us with this by scoring our first goal 14 minutes in. Going into the second half, the lads still treated the game like it was 0-0 with their sights set on hitting the back of the net again. Josh Clarkin again, scored us our second goal in the 51st minute really helping the boys ramp up the momentum. Onehunga got away in the 87th minute to make the score 2-1. A well fought win & the Reds were beyond deserving of this result. We are so proud of their efforts & look forward to the next challenge ahead. Thank you our sponsor Ebbett & all of the supporters who were there cheering us on during one of the toughest games we've faced in a while! Hopefully we can see you all again this coming Saturday 21st May!

Goals galore for Cambridge this week as the reds had the game sealed at half time to the tune of 4-0. Peter Buesnel started the rout when he pounced on a pass back and cooly rounded the keeper for the first goal. Then, Aaron Huesser came to the party running riot with a well taken 7 minute hat-trick before the break.

The second half was a slightly different story as Claudelands (and credit to them) kept up their spirits in search of a goal. Sadly, it wasn’t to be their day thanks to a solid defensive performance from trio, Dagnall, Garmonsway & Stead with the help of vociferous goalkeeper Rex Fowler between the sticks. Cambridge found the net once more as Adam Brady unselfishly squared the ball across to Jason Szabo slotting home for his second goal of the season. 5-0 the score ended, the reds continue unbeaten and move up to second in the table.

MOTM: Aaron Huesser for his fantastic first half performance and hat-trick of goals.

Cambridge were very slow out the gates going down 2-0 in the first 20 minutes.

They finally clicked into mid way though the first half starting to string some nice periods of play together and have a few opportunities on goal but were unable to convert. The break for Cambridge came 60 minutes in when a loose ball outside if the box was met by Kurt von Keisenberg and it took a defection and rolled into the back of Northerns goal. The second came from a Jack Harman throw in that was flicked on by Anaru Myers the ball was then fired home though the head of Chris Hill at the back post.

MOTM: Kurt von Keisenberg for his all round solid game controlling the back line

Next game: Claudlands Rovers Away

Cambridge Over 35's vs Ngaruawahia

The over 35 match of round involved the the defending champions Ngarawahia against the new boys on the block cambridge, the result was a very very fair 0-0 draw, the game started at a rather fast pace with both midfields competing for control and was very even throughout the 1st 20-30 minutes the with some very good link up play between the midfield 3 of grant, Robbie, and Sean and some well timed and vital runs from Kieren on the left hand side and Pablo on up front, both teams may of had 1 half decent shot during the 1st half, the dreaded Cambridge sniper reared his ugly head and took aim at houndie rendering him useless for the remainder of the game.

Both teams again tussled for dominance in the 2nd half with the back four of Fabian, Darren, Adrian and Alex keeping the ngaras attack at bay, it took a strike every player dreams off from the. ngaras left back to give us the wake up call we needed by rattling the left hand upright from distance. Both teams had chances to steal the victory good work from the attackers of the pablos, deivis Marcelo and I think Miguel. the best was a late penalty appeal when Robbie was through on goal only to be solidly fondled by the opposing goal keeper only to be left on deaf ears as a play on, every player played there hearts out and left everything out on a bouncy dry pitch, special mention has to go to player manager James coomber who last minute pulled out from over indulging on tainted kiwi fruit and was too scared to fart,

White hall fruit pickers player of the day was Alex ball for using his right foot.