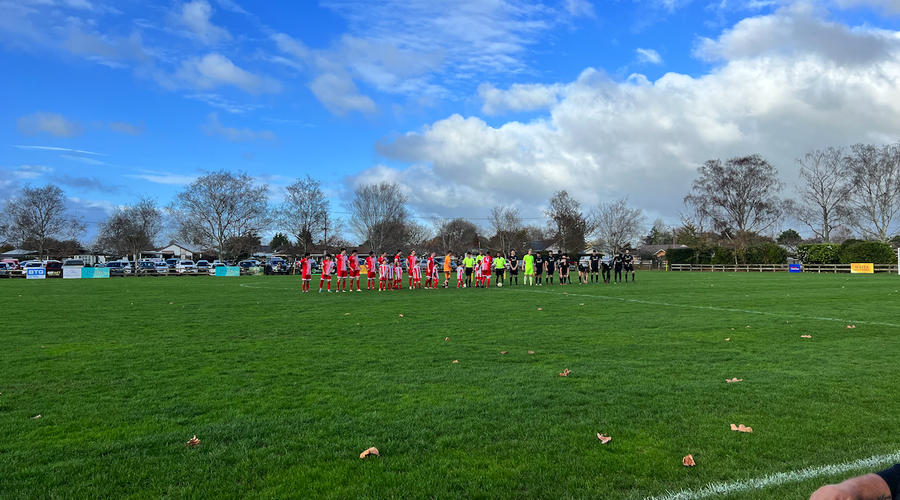 Check out results from the past weekend!

Saturday’s Northern League game V Beachlands was an extremely important one for both clubs. A win for either side would reignite a push for a top two finish in what is a very evenly contested division. For this game Cambridge were without the presence of co-coach Antony Meicklejohn who was away celebrating the birth of his first child Hudson Harry Meicklejohn.

Cambridge began the game well taking the lead after just 2 minutes when Anton Ganas fired home from close range. Nine minutes later Josh Clarkin doubled the lead with another neatly taken goal. In the 18th minute and totally against the run of play, Beachland pulled a goal back through a Cambridge defensive error. However, this was just a slight hiccup as Josh Clarkin completed his first half hattrick with two more excellent goals in the 21st and 26th minutes. Seemingly, with the points in the bag it looked like Cambridge would run away with a convincing win. Unfortunately, things began to unravel when, with just one minute remaining of the first half, centre back Hamish Watt was given a second yellow card and dismissed from the field after a collision with the Beachland’s keeper.

Down to 10 men, Cambridge reorganized to a more defensive strategy which enabled Beachland Maratai to edge possession at the beginning of the second half. However, Cambridge gradually began to wrestle back control when, in the 54th minute, things went from bad to worse with Midfielder Will Jackson given his marching orders by the referee after what appeared to be a head butt on an opposing player. Now down to 9 men and with still 36 minutes remaining Cambridge were asked to fight a rear-guard action. Coach Bradley Rea once again was forced to reorganize his team and, with the expert leadership of skipper Patrick Woodlock, his players responded with great character and immense determination. In fact, it was Cambridge that looked the more threatening team as the game played out to a goalless second half.

This was a very eventful, and incident packed game in which Cambridge ran out deserved winners.  This was an emphatic and determined team effort, but the player of the day went to Josh Clarkin for his three goals and tireless contribution.

Next week Cambridge travel to Premiership side, Auckland United for the next round of the Chatham Cup.

Saturday saw the goals fly in for the Cambridge u23s hitting the back of the net an impressive 10 times.

Cambridge took the lead through Kyran Lockwood who whipped in a dangerous corner and it bypassed everyone to put Cambridge 1-0 up. Kyran then added his second 4 minutes later with some nice patience build up play allowed midfielder Matt Kozak to slide Lockwood through to grab his second.

Lockwood then turned provider with a inch perfect cross onto the head of Matt Nixon to see Cambridge go into the changing rooms 3-0 to the good.

The second half saw Beachlands hit back just after half time to close the deficit to 3-1 with a long range effort beating goal keeper Fraser Nicholls.

Conceding the goal saw Cambridge take it up another level and hit a further 7 goals with pick of the bunch going to Kyle stead who hit top bins with a thunderbolt from 35 yards. This win saw the u23s take 3rd spot 3 points off second place.

Next league game is against Franklin United at home 25/6.

The unbeaten and injury ravaged champs hosted a physical Tokoroa team at home this week.

Having suffered from 6 injuries over the previous 2 games and a further couple of players unavailable, the champs fielded a much changed side in an unfamiliar formation against a difficult opposition.

After a relatively even first half the game was tied at 0-0 but the champs were feeling pretty optimistic and felt they had the better of the half. This optimism was soon stamped out by Tok though as the Cambridge backline stopped for what looked a stonewall offside as the the away team striker ran past Fowler in net and tucked away in to an empty goal. The champs rallied and missed a host of great chances through Huesser and Woutersen when again a Tokoroa counter attack fell to an unmarked man in the 6 yard box who made no mistake with 14 minutes left on the clock.

Cambridge didn’t let their heads drop however and turned up the heat once more and were rewarded in the 80th minute when a strike from Woutersen was blocked by a Tokoroa player’s arm in the box resulting in a penalty which Woutersen made no mistake in dispatching to bring it back to 2-1. Chance after chance came for the reds with no luck until the 87th minute. A trademark Jordan Silvester run down the right hand side got the winger to the byline to whip a brilliant cross to the back post where player coach Josh Dagnall came racing in with an outstretched leg to direct the ball back towards goal with the backpedaling Tok defender only able to deflect it into the roof of the net.

A few more chances fell to the champs who felt like they could nick the result late on but the Tok backline held firm and that’s how the game ended - 2-2.

MOTM: Wade Ellis for a tireless display in midfield.

It was a big game for the div 3 team going into a top of the table clash. Thunder and lightening set the scene early in the morning but a call was made for the game to go ahead and the pitch was in better condition that anticipated. The Cambridge team came out strong dominating the first half and possession of the ball.. There was a very early opportunity with a corner onto the head of Captain Tom Gifford that the Unicol keeper made a fantastic outstretched save to block. The opening goal came after a run down the line from Andrew Myers who the put the ball into the box with a low and hard cross for Jack Harman to slot away. The second goal build up was very similar with a ball in from Kai Funnell that was put away by Pete Buesnel.

Into the second half Unicol started strong and lead the first 20 minutes. As Cambridge settled back into the game Pete Buesnel made a fantastic run down the left wing with the ball cutting it back accross for Andrew to send into the back of the net.

It was the best team game and communication the team has had this season and looking to continue building.