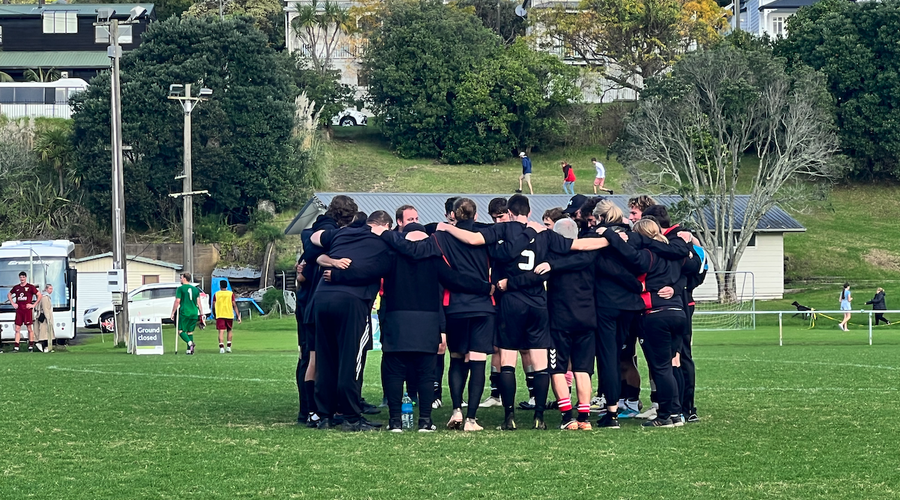 The Chatham Cup is often a backcloth for drama and excitement and this fixture certainly didn’t disappoint. Cambridge the rank underdogs were drawn against North Shore, a team two divisions higher in the Northern Pemier League.

Cambridge began the game on the front foot dominating most of the early exchanges. So. It was against the run of play when North Shore, through Paredo, hit the lead from what looked to be a clear offside position. Protests from the Cambridge players and their strong travelling support fell upon deaf ears as the referee allowed the goal to stand. Undeterred Cambridge maintained their pressure with Jack Portegys firing home from close range in the 38th minute. 4 minutes later leading scorer Josh Clarkin headed home to take Cambridge into the half time break with a 2-1 lead.

The second half began with Cambridge pressing hard for a third goal, and what a goal it was. After two blocked shots from Clarkin and Glen Carmichael, Anton Ganas blasted home a long range shot from outside the box into the top corner. This was a goal to remember and will surely be a contender for goal of the season. Spurred on, Cambridge maintained their control for most of the second half, weathering a final 10-minute surge from Nort Shore who came close to pulling a goal back. However, it was not to be, the result ending in a 3-1 away win to Cambridge and a place in the next round. There were notable performances all round, but special mention must go the Hamish Watt and Jasem Khatkar. Man of the Match for Cambridge for a masterful midfield performance and a magnificent second half goal was Anton Ganas.  Coaches Rea and Meicklejohn are slowly beginning to build a young Cambridge side worthy of further cup upsets.

Cambridge saw off the first half of the season with a much needed win to keep up with fellow unbeaten rivals Te Puke United. Cambridge picked up an early lead with a well taken goal from striker Dylan Blair. The reds looked certain to go on a goal rout when Dylan Blair pounced on some scrappy defending and finished off for his second with a composed strike in to the corner. Papamoa were limited to long range efforts but were rewarded an opportunity to get back in to the game after an effort was parried out by Fowler only for it to be tapped in to the net. 2-1 at the break.

The second half wasn’t too lively but Cambridge continue to test from all angles and Papamoa had to make do with spending a lot of time in their own half. Fortunately, Blair brought his shooting boots and rifled a sweet strike in from distance to complete his hat trick. A few injuries throughout the game allowed Wade Ellis, Josh Dagnall and Ryan Ashby to get amongst the action and it was Ryan Ashby who sealed the win smashing the ball home inside the box to give Cambridge some breathing space. The game ended 4-1 and the quest for the title is heating up with 4 teams in the mix midway through.