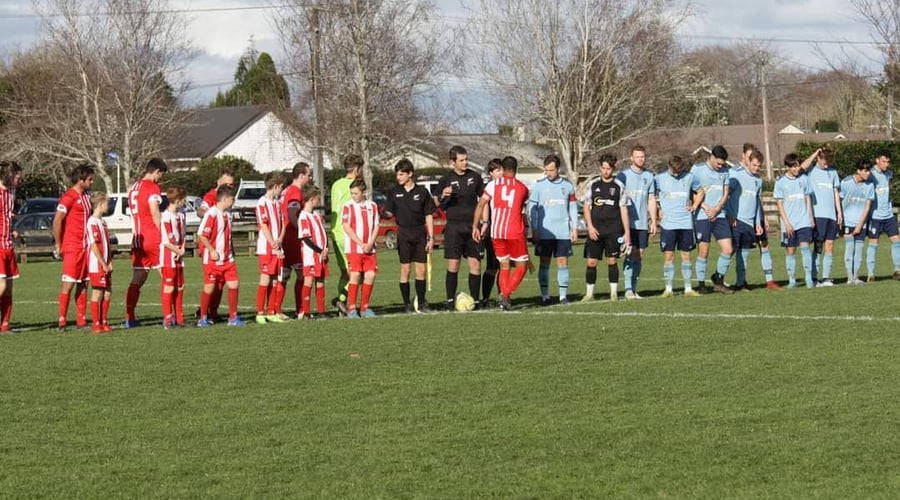 Without Josh Clarkin, the League’s leading goal scorer, and fellow striker Matty Nixon, Cambridge Coach Bradley Rea was forced to reshuffle his side for this Northern League Division 2 fixture.

The first half produced some excellent football from both teams. Without a doubt this was the home sides best performance of the season so far. They were quick, adventurous, and approached the game with a great deal of flair and freedom. Sham Chetty and Blair Pennell linked well on the left flank and Jasom Khatkar and Dan Clarkin did likewise on the right. Patrick Woodlock, Nate Claridge and Anton Ganas were industrious in the midfield, whilst Glen Carmichael’s speed and tenacity up front caused the Northland defence more than a few problems. Although scoreless at half time, the game was a pleasure to watch. HT0-0

With a very heavy pitch the pace of the game was always likely to slow in the second half. Both teams cancelled each other out and it was becoming apparent that one goal would settle the stalemate, and that goal arrived for Northland late in the second half. Undaunted, Cambridge continued to press for the equaliser. For the second week running, star centre back Jack Portegys succumbed to a hamstring injury and was replaced by Keren Hill, and  it was Hill that almost snatched a point for Cambridge with a shot that fizzed past the wrong side of the post. A further change was made when holding midfielder Claridge, who had an excellent game, was replaced with striker Colin Coster. In the dying minutes coach Rea brought on 15 year old product of the Ricki Herbert Academy, Raheem Nabizada for his first team debut. The combination of the experienced Hill and the youthful Nabizada was one of the highlights of the afternoon.

Although beaten this was a thoroughly entertaining game of football in which Cambridge were very unlucky not to come away with at least a point. Man of the match for Cambridge was Kyle Stead who was totally dominant at the back. His speed, strength and perceptive reading of the game was simply outstanding. A special mention must also go to the Cambridge keeper Nate Camplin who had a faultless game between the posts.

Next week Cambridge are away to League leaders Ngaurawahia.

RESULT: Cambridge 2-1 Waikato Unicol SCORE: HT 0-1 GOAL SCORERS: Mason Woodall & Dylan Blair SUMMARY OF GAME: They’ve had a couple names throughout the season; The Invincibles, The Draw Merchants - but could they soon be dubbed The Champions?

The clubs championship side almost have one hand on the title with a (as Trump would describe) “yuuuge” win over league leaders Waikato Unicol. The side called upon experience in the shape of Robbie Greenhalgh & Andrew “Houndy” Taylor who gave it everything to help the injury plagued reds.

Windy conditions on the famous bobbly pitch 2 made for a scrappy affair and Unicol showed why they were in the mix for the trophy with numerous efforts including a free kick rattling the bar in the first half. They eventually went 1-0 up with a great finish and left Cambridge with a big task on their hands to turn it around. The teams went in 0-1 at the break and Unicol well on top. The second half was a different story however. The wind had a huge part to play on the game and it was this time giving Cambridge a boost. Fired up in all areas of the pitch, the reds were peppering the Unicol goal and got their just desserts when Mason Woodall scream a half volley in to the net sending John Kerkhof Park in to raptures. Everything just seemed to be going right for Cambridge and a winner was written in the script, and so it came. Dylan Blair the hero, bringing the ball down off his fractured sternum and expertly looping the ball over the goalkeeper and again erupted the home supporters with limbs to be seen everywhere. It was a very hard fought victory which puts Cambridge joint on top with Otumoetai who have a considerably lower GD. The reds have a great chance to add more to the tally with a final trip to end the season at Papamoa. It could be a day of celebration should they hear news of a Tauranga City slip up… buckle up sports fans, it’s going to be a tasty end to the season.

After suffering there second lost of the season Cambridge Div 3 needed a win to keep them at the top of pile. Cambridge started of the stronger team having most the chances, Cambridge striker Peter Buesnel had a looping header cleared of line. Mid way through first half momentum was changing and Claudelands managed to take the lead. Couple minutes later Cambridge managed to get leveller with a penalty from Captain Tom Gifford who calmly slotted it to make it 1-1. Cambridge was lucky enough to get another penalty where Gifford missed it but managed to score the rebound. Going into secondhalf Cambridge knew need to get another goal to secure 3 points. Late in the second Cambridge had a couple of chances to put the game to bed but missed the opportunities. With 10 minutes to go Claudelands managed to get there 2nd goal of the game. Overall Cambridge wasn't happy with the point but are hoping other results may help them out. Player of the Day was Tom Gifford for his 2 goals and work in the middle of the park.

Korikori Park provided a very cold, wet and windy playground for our ladies today as we faced Northern for the second time. We started with the wind behind us hoping to make the most of some long shots but unfortunately we couldn’t find our range in the first half and it was Northern who scored first from a well placed through ball after 20 minutes. Cambridge dominated possession but we went into the half 0-1 down. After regrouping we started the second half with a renewed energy and Zoë capitalised bringing us back to 1-1 after only 4 minutes We fought hard for the rest of the second half playing some nice football but we couldn’t get past the Northern keeper and finished up with a 1-1 draw. We have one game left against Melville before our league splits into a top and bottom four for the final round of the season so we’re looking to win that and get ourselves into the top four A special thank you to our sponsors Hill Homes and Vigour Physio and to all of our supporters for braving the conditions today POD Chantal for her epic work rate in the middle

Next week - no game scheduled

A huge game today for our squad, last time we met Huntly we were easily defeated, this time we left the changing rooms determined to turn the table. We started the first half strong and ended it the same, both teams equally deserving of a win, there were many great passes and shots on goal but both goalies brought out thier A game today. Gabby and Lorena working fantasic down the right wing together earning Gabby player of the day for her non stop effort. Second half the team a little worn out but just as determined went out looking for that win. Unfortunately a penalty awarded to Huntly in the box found its way to the back of the net, credit to Elliot who carried on with head held high. Georgia showed her talent with some on point corners, but thier well organized defence kept us at bay. Hoping for a draw we kept battling but they managed to slip a sneaky short pass in the goal sealing thier 2 nil win. Our team played well and should be proud of the effort today showing we deserved to be sitting in 2nd place..with 4 games to go we hope to keep that place on the board. POD Gabriela Soledad Montorfano

Next game Sunday 7th August away to Te Awamutu