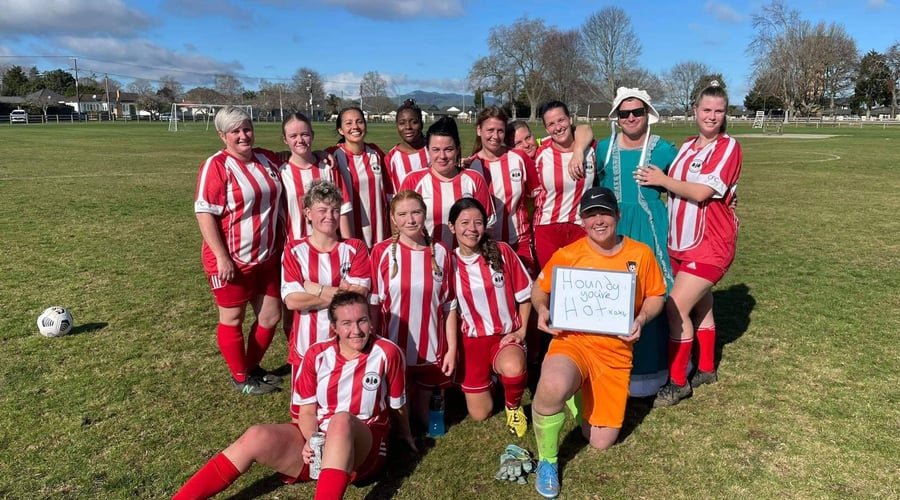 Check out our match results from this weekend!

With no training last week due to rain we were looking forward to kicking the ball around and finally getting back to football. Our ladies dominated possession in the first half and any attempts at an attack from Matamata were short lived thanks to a well managed back line. We went into the half 0-0 but confident we could play another solid half of football and maintain our hunger to win.

The first goal came at 72 minutes thanks to a calmly placed penalty by Gen. Five minutes later Rach made it 2-0 from a well finished 1:1. Safe hands Aimee maintained our clean sheet and squashed several Matamata attempts on goal with some stunning saves. Unfortunately the Matamata keeper saved a second penalty but we were happy with a 2-0 win and the determination our ladies showed the whole game.

Big thanks again to our sponsors Hill Homes and Ella from Vigour Physio.

NEXT GAME: Away v Taupo

A beautiful winter's day for a home game for both Cambridge teams, and a highly anticipated rematch for Div II with Thames. Both sides came out fighting, but quick play and good team passing saw Thames with the first goal of the game. Strong team effort across the Cambridge back line shut down multiple opportunities for the Thames attack, and Leydi was able to answer with a goal for Cambridge to keep us in the hunt. Kym covered the midfield with absolute grit, earning player of the day accolades and boosting the intensity from end to end. One more goal for each side before the halftime whistle for a 2-2 score. Could we keep up the pace and pressure in the second half?

Fresh legs made the difference for Cambridge, and we were able to continue the physical play across the pitch. Several near misses and shots on goal kept the pressure up, Leydi slotted one more home to give Cambridge the edge. Elliot's shutout second half brought home the win

Next Game: Away to Unicol 11am

Saturday saw Cambridge host neighbours claudelands rovers on a bright Saturday afternoon after some rain in the week building up to the game. Claudelands could of taken the lead early on after the striker missed a low driven cross missed his outstretched leg by millimetres.

Cambridge slowly started gathering moment and went close through striker Davey Smith who tested the goal keeper from long range shortly followed by youngster Andrew Ganas who shot was travelling into the top corner but the claudelands gk managed to pull off a fantastic save and was able to hold onto the ball saving the on rushing Cambridge attack. The midfield three of Blake, Sham and Kieran lockwood struggled to break down and compact defence and the field was also taking its toll on the players with slips occurring left right and centre.

With the teams tied at 0-0 at half time Cambridge were hoping to hit the ground running with pace of Johnny Grimes moved into CF but Cambridge struggled to find that killer pass. Claudelands did take the lead after a throw out from GK Callum Roberson didn’t quite make his target and claudelands had a hit and hope from distance which managed to squirm it’s way into the near post. Claudelands then hit Cambridge back with another goal after a questionable foul on the keeper but any protests were waved away and claudelands were 2-0 to the good.Claudelands gk came to the away teams aid on e occasions with some outstanding reflex saves as well as the cross saving claudelands from a Cambridge comeback

A bad result in Cambridge quest for a top 3 finish this season and will be hoping to get back to winning ways next weekend.

Next up West Auckland away

Coming off the back of their first defeat of the season Cambridge knew they had a good chance to bounce back against bottom-of-the-league Claudelands. Knowing they needed a good start, Cambridge took an early lead 2 minutes in thanks to a deflection off a Claudelands defender re-directing towards goal and over the keepers head. Cambridge dominated the possession and kept Rovers camped out in their own half. The second goal came on the 27th minute with some excellent play from winger Ben Mwangi feeding the ball in to the box with Woutersen rocketing his shot towards goal proving too much for the keep to deal with and could only palm it in to the net. A lot of chances came from Cambridge’s wings and much has to be said of the energy from Mwangi and Silvester. 0-2 at the break and feeling comfortable.

The second half came and with more goals, starting with Brady on the 52nd who will never get an easier tap in after Woodall screamed one at goal only to be fumbled by the goalie and tapped in from 2 yards. Shortly after Huesser came to the party with a goal of his own with a neatly placed finish landing to him after a near perfect volley from Wade Ellis was deflected towards Huesser. Despite that, Ellis was able to get amongst the goals from an indirect free kick in the box with Brady laying off to Ellis to smash home in to the top corner. The final goal came in the last minute, Aaron Huesser grabbing his second with a header from a corner and flick on to put the game to bed.

A much needed high scoring game and a comfortable performance keeps Cambridge well in the mix for the title with 3 games remaining.

MOTM: went to captain Sam Garmonsway for his solid and composed display at the back.

Next game: (H) vs Tauranga City

After suffering there first defeat of the season Cambridge wanted to back to winning ways. With no game and no trainings Cambridge started off the game slow and off the pace. West Ham took the lead early with a well work team goal. Cambridge had chances to equalize with Chris Hill hitting the crossbar from a Kai Funnell pin point free-kick. Going into late first keeper Paddy Espin launch the ball to young winger Keyson Mackey, who put his body on the line to win the ball against 2 West Ham defender to set up Peter Buesnel for his first goal of the day. Cambridge started of the second-half with chances but couldn't put the ball in the back of the net. Until Tom Gifford seen the run from Buesnel and played him through for his 2nd goal of the game with another outstanding finish from a tough angle. With the lead Cambridge knew they needed to get the 3rd goal to put with game to bed. Which they finally got from a thunderbolt from Gifford. Hill shot from 18 yards was too powerful for keeper to handle which landed to Gifford who was in the right place and slotted it. Fans was saying it was best goal they've seen at Cambridge.

POTD: Peter Buesnel from his overall workrate leading the line and his 2 quality goals.